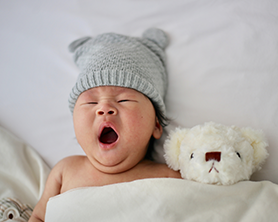 Many first-time parents ask themselves how they will ever change a nappy with as little mess, fuss and “incidents” as possible. Here’s how to make nappy changing a little less daunting.

Preparing to change a nappy

Set up a nappy-changing area at home with clean nappies, wipes, cotton wool and a barrier cream. It’s also handy to have waterless cleanser to clean hands easily. Don’t rely on the nappy’s smell as a cue to change – your baby could be filling up to 10 nappies a day. Always change the nappy when it’s wet; this way your baby will always stay dry and you’ll prevent chafing and nappy rash.

How to change nappies

If your baby won’t lie still and likes moving around while being changed, try to play games like “peekaboo”, distract them with a mobile, or sing songs. You could even move the changing station to a spot that offers a view – for example overlooking the garden.

How do I spot nappy rash?

If your baby’s nappy area looks irritated and red, chances are it's nappy rash.

To treat it, gently cleanse the nappy area and pat dry. Smear on a thick layer of nappy rash cream or ointment containing zinc oxide or petroleum, such as Purity & Elizabeth Anne’s Petroleum Jelly, which helps to soothe skin and create a protective barrier from moisture.

If the rash doesn’t disappear after a few days, contact your doctor.