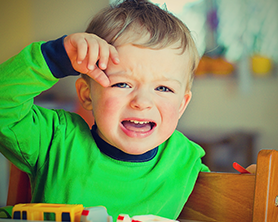 That blissful period of harmony between you and your baby starts to change when they become toddlers and realise that they are their own person and can have their own way. They’re eager to push the boundaries of this new-found independence, which might push a few of your buttons in the process!

Aren’t you amazed at how a seemingly random event can send your little one into a complete emotional meltdown? Take heart - at this age, tantrums are normal. Toddlers don’t yet have the vocabulary to express how they feel, so they’re likely to behave really badly when they’re angry, frustrated or disappointed. How should you react when your preschooler is raging? Pause…breathe…don’t lose your cool too! Your primary role as a parent is help your little one identify and name what they’re feeling, reassure them that it’s ok to feel like that, help them deal with their feelings in a healthy way and talk about how they might better handle a similar situation in the future. Try not to take your toddler’s tantrums personally. Put yourself in their shoes…at this stage, they are still the centre of their own universe, so they’re bound to get upset when they don’t get their own way. “Pack up your toys now, it’s bedtime” may be met with kicking and screaming. For them, your words mean “stop the fun!”

Hair pulling, kicking and biting may make you jump to the conclusion that your little one has turned into a “problem child”, but these behaviours are a toddler’s instinctive way of reacting when they feel threatened. Teeth are a mammal’s natural weapon and little ones can’t rationalise when they’re defending their turf on the playground! Avoid reacting to aggressive behaviour with yelling or slapping, as this will just make your toddler feel more overwhelmed. Deal with any violent behaviour by stopping it in its tracks and firmly stating that the behaviour will not be tolerated. Stay calm, remove your little one from the situation if they’re out of control and stay close so they feel safe and loved. Only revisit what happened once they gain control of their emotions. Remember…you are their role model!

Starting preschool can be scary for a little one who feels unsure in an unknown environment, so expect some clingy behaviour. Encourage your toddler to talk about their worries, and point out some exciting new things they can look forward to. Take a trip together to the classroom beforehand and let them meet their classmates, so that they feel supported and more in control. Don’t forget to be kind to yourself…you have your own emotions to deal with too. It’s ok to ask for help if you need time out.