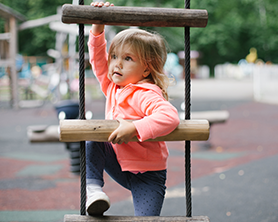 “Is it a boy or a girl?” was probably the first question you asked at the ultrasound or when your baby was born. You most likely followed “gender-appropriate” rules when choosing their name, their clothes and their toys. Gender influences everything about your child, including their behaviour and attitude to others. So how can you encourage your preschooler to develop their own identity?

Our sex (male or female) is biologically determined by sex chromosomes and internal reproductive organs. By the first year, your toddler will have gained a basic understanding of gender - the “rules” of being a boy or a girl - by watching family, friends, even movies! By the age of 3, your toddler will identify with a particular gender, usually the one that matches their sex, and will very much want to fit in with that group.

Raising a thoughtful, well-rounded son can be a challenge. Boys are boisterous by nature and get plenty of scolding as a result. They are often slow to develop social graces because they tend to play in groups rather than have one-on-one friendships. Arrange playdates for your preschooler and encourage him to share his toys and use good manners. While girls have free rein with their emotions, boys are generally expected to “suck it up” or fight it out. Without an effective outlet for their emotions, they often lash out or withdraw. When your son gets upset, help him to understand what he's feeling and why. Even if he shies away from hugs and kisses, sneak in lots of affection so he feels safe and secure. Encourage physical exercise to blow off steam. Show him that talking is a more useful way to express emotions than being destructive.

Girls are generally taught to ‘act nice’, so being able to stand their ground does not come easily! Being assertive is not the same as being confrontational – your daughter can learn to express herself without making the other person feel bad. Discourage gossip - being mean is a girl’s version of aggression and it’s just as destructive as a boy’s fists. Encourage your daughter to explore ‘boy’ activities. Find out what she's capable of and what she enjoys. There’s no reason why she can’t play soccer or excel at maths! Point out positive female role models – athletes, politicians, CEO’s - who don’t rely on looks alone to be successful. Encourage your daughter to believe in herself and accept her strengths and weaknesses.

Doing away with gender stereotypes

Your attitude towards gender roles has a big influence on your child's views about gender. Let your son wash the dishes and your daughter wash the car. Their confidence will blossom when they realise that their competencies aren’t limited by their sex.